The appointment was scheduled at an Athens school, where children’s smiles never cease.

Every afternoon, from 4 to 7, METAdrasi implements the educational activity “Step2School”, where children who live in temporary accommodation facilities, shelters for unaccompanied minors or apartments provided to refugees and migrants, attend Greek language, mathematics and foreign languages courses in the form of remedial education. This activity also welcomes other children that live in the neighborhood.

It is 5 o’clock and the first afternoon classes are already over. The schoolyard is filled with children of all ages. They are playing, they are running, some are speaking in Greek, other in English, other in Arabic. Yet, they have one thing in common: a desire to learn.

Currently, around 200 children attend METAdrasi’s programme and 80% of them also attend the formal education of public school in the morning. This is the goal, after all, as Nicoletta Dimitrouka, METAdrasi’s manager for the educational activities in Athens, states. To help as many children as possible to enroll in school. Also, for those already enrolled, to integrate faster and easier at school, by acquiring a better knowledge of the Greek language.

First stop, classroom A1 where lessons of remedial teaching take place. There, we meet children aged 6 to 9, that is students of the first, second etc. school year. As it is easily understood, they are the naughtiest ones. Their teacher, Stavroula, tries to put things in order. “Who hasn’t done their homework?” she asks. “Me!” says immediately Zaira and the teacher goes by her side to help her. The day’s letters are written on the board. Eε for “ελέφαντας” (elephant), Ζζ for “ζάρι” (dice). She asks the children to say the word “ζάρι” (dice) and they all together repeat, as if in a choir, the new word. All the children here speak Greek.

“The youngest the children, the faster they learn”, explains Ms Dimitrouka. Such is the case of Layla from Algeria. She has been in Greece just for two months, but she has already managed to write in Greek and to understand some words.

Layla is at A2, where older children, aged 10 to 12, attend remedial education. She is one the most quiet and diligent children in her classroom. She was concentrated in her schoolbook and her exercises during the whole time. She was copying sentences from her Greek language book (with beautiful handwriting, we should add) and translating them into English, which she speaks fluently. She explains to me that she arrived here just two months ago and that she likes it very much. It bothers her not to be able to speak the language but she understands that it takes time. Her older sister, even though she has been here for just so little time, started going to high school and she attends courses like philosophy and ancient Greek, in spite of not having familiarised herself to the Greek language yet. 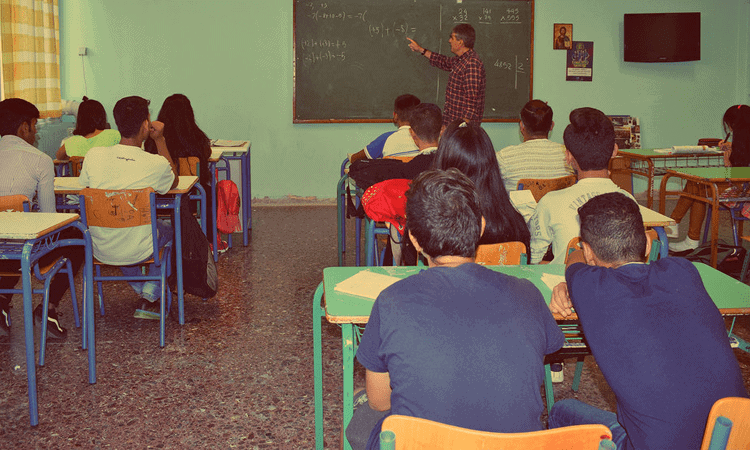 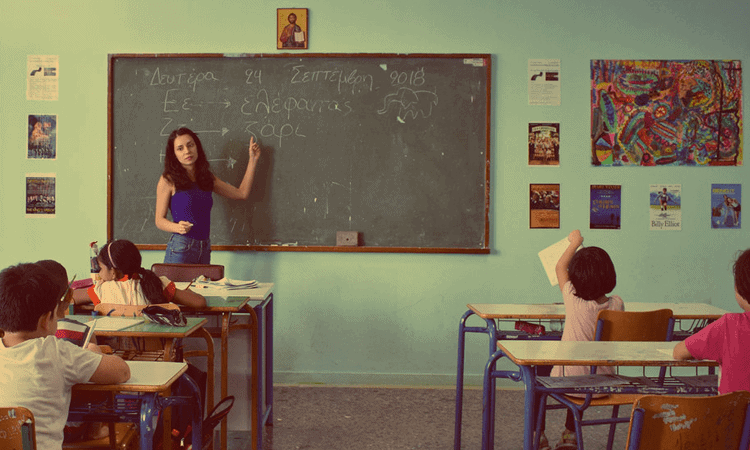 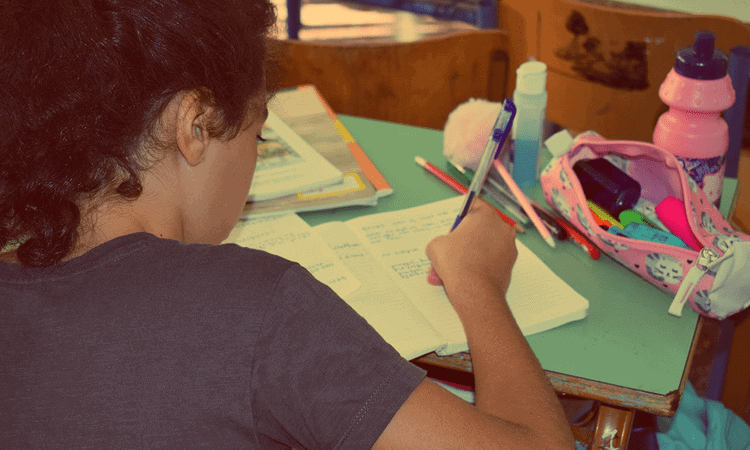 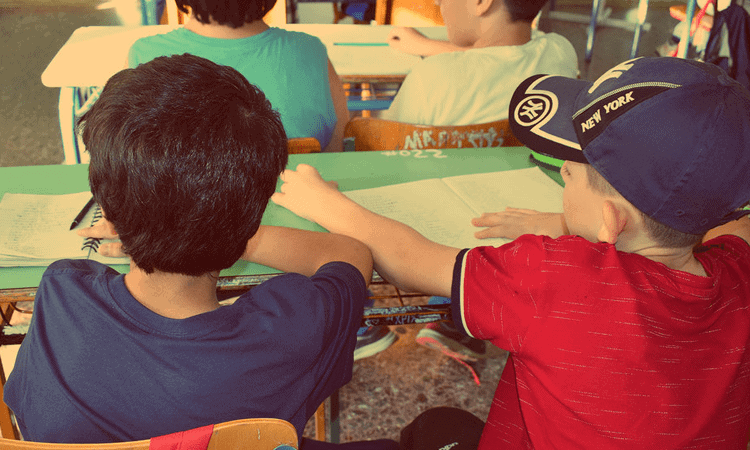 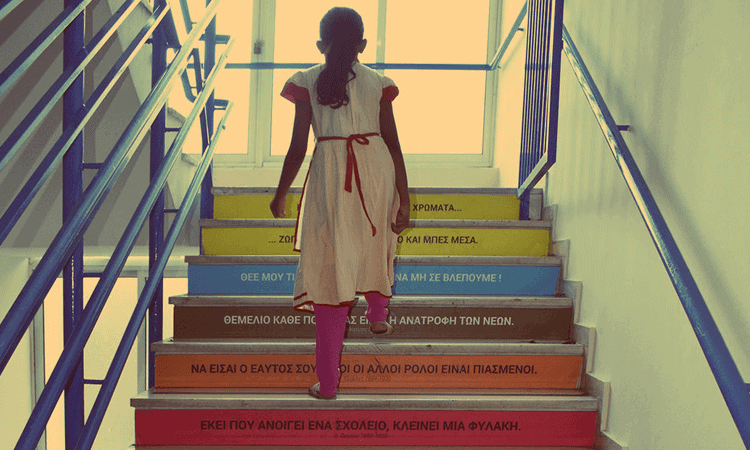 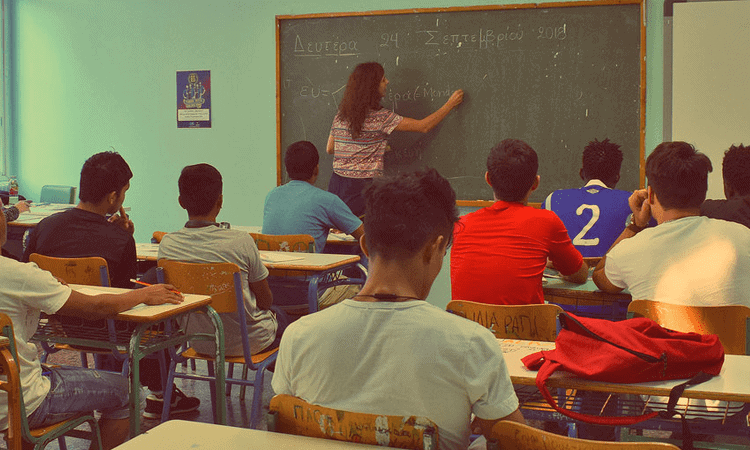 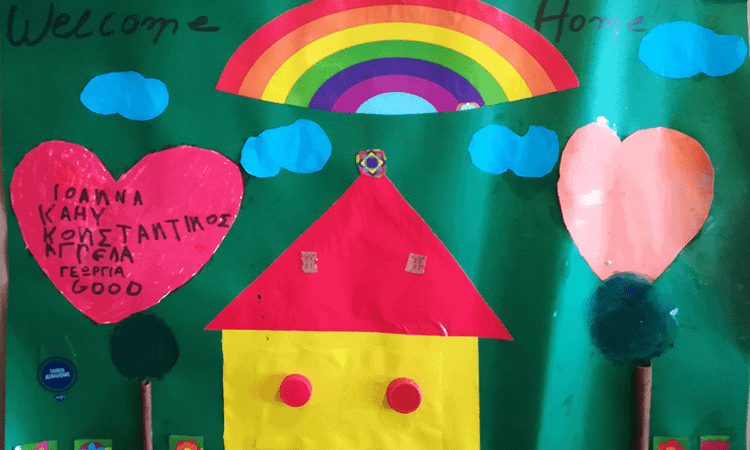 “Children’s integration in formal education is defined by the number of years that they have attended school in their home country. For example, a child that has attended school for six years in their home country will enroll at the first grade of junior high school. In many schools there is a reception class, where students are taught the Greek language, while they are attending the rest of the school’s classes. With projects like this one, we help these children further”, explains Ms Dimitrouka.

“Miss, what does “ξενιτεμένος” (emigrant) mean?”, Mohamed from Syria asks, reading a sentence from his book. “The person who has left their home country”.

“How many years have you been here for?” I ask him during the break. “My whole life”, he answers with a smile and I understand that luckily for him the meaning of “migrant” does not influence him the same as other children, since Greece is the only country he has known.

Yassin is learning the articles in singular and plural forms. He is from Egypt and has been living in Greece for 3 years. It did not take him longer to learn to pronounce them perfectly clearly. He has a small difficulty with the article “των”, but he will learn this as well.

At break time we meet Layla’s sister, Souad, with her new friend, Amala. Amala is from Syria and has been in Greece for a year. They met at high school and Souad convinced her to join METAdrasi’s classes with her. Amala still has difficulties at school and she does not speak Greek. “Do you have difficulties, Souad?” I ask, taking into consideration that she has only been in Greece for two months. “I am trying”, she answers in broken Greek. Souad aspires to become a psychologist or a lawyer and I foresee that, if she keeps being as diligent as METAdrasi’s people tell me, she will manage it. She is very pleased when I tell her that her sister makes beautiful letters.

We ascend to the second floor and we join the language and mathematics classes. There, children aged 13 to 17 learn from scratch how to communicate in our language. Greek and English are used in intervals, in order to help the children comprehend. As we enter the classroom, the double consonants are written on the board.

“Can you give me an example?”, says their teacher, Evi.

“Τσάντα” (bag), answers Hassan. He is 17 years old and he is the oldest one in class, as I will find out later. He is the first to give the answer. He has been in Greece for one year and three months.

“All of us?” someone answers hesitantly. “No, the opposite. Girl. Opposite, α-γ-ο-ρ-ι, boy”, their teacher explains. “Let’s move to the next one”.

“Give me a word starting with “Τζ””, the teacher says. This one is difficult for them, even for Hassan. The teacher goes towards the glass (τζάμι) of the window and when she points at it everyone understands the answer.

In the next classroom, in Mathematics, we learn how to add, subtract, multiply and divide positive and negative numbers.

They find it a little difficult to understand the division. And so do I, to be honest.

As Konstantinos, the maths teacher, explains, numbers and math symbols are easier for children to understand, compared to learning the Greek language. Besides, mathematics is an international language…

“Sir! Sir!” calls out Asla. “Will I have time to go to the Greek language class as well?” “It is right in the next room” he answers. “But I want to be here as well”, she says disappointed. In the end, she decides to attend next door during the following hour.

“We have noticed a huge difference in the children that attend intensively our courses. They sit happily behind their desks, they participate in class. They make impressive progress. There are children who can now speak, understand and communicate in the Greek language, something that seemed impossible last summer” Ms Dimitrouka explains to me, as we are heading towards the exit.

She also adds that METAdrasi never operates classes inside refugee camps. “This is why we are here, co-operating with the Municipality of Athens and the “Open Schools” initiative. So as to avoid the ghettoisation of the children and help them to integrate, to socialise. We want to promote respect among the children, to help them adjust to the school environment. Because we must not forget that there are children who have never been to school before, in their home countries, so a big challenge is their adjustment to the school rules. We also emphasize on Greek language teaching and the relevant school syllabus”.

*METAdrasi’s educational activity for refugee and migrant children “Step2School” is implemented with the support of European Commission’s Civil Protection & Humanitarian Aid Operations department (ECHO) and in cooperation with the “Open Schools” of the Municipality of Athens, which operates with Stavros Niarchos Foundation as funding donor and with the coordination of Athens Partnership.

*Children’s details have been altered in order to protect their personal data.

You may read the original article (in Greek) here.

“We are not racist in Kamena Vourla”