“(I feel) inspired by the continuing generosity of Chios throughout the migration crisis as displayed by NGO METAdrasi with its commitment to getting kids into school and its work with unaccompanied minors”, mentioned the U.S. Ambassador to Greece, Geoffrey Pyatt, in his tweet. 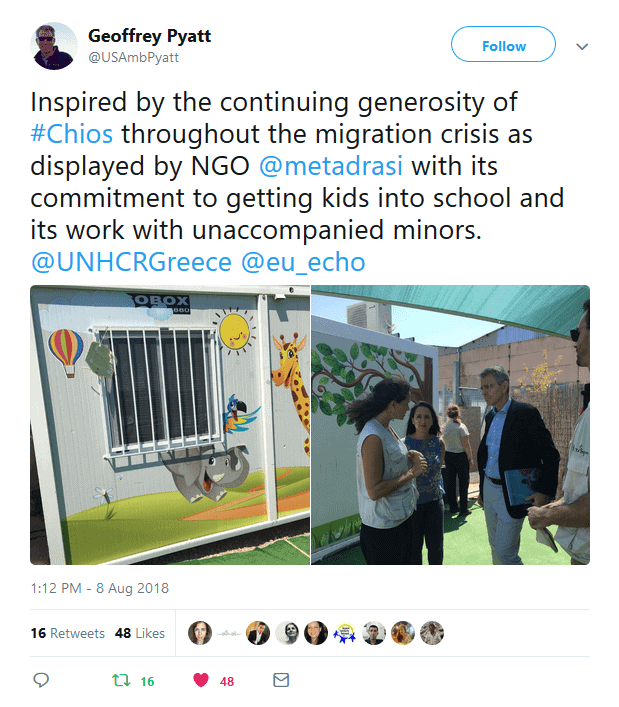 We warmly thank the Ambassador who, during his visit at the island of Chios, dedicated a significant part of his schedule to METAdrasi’s activities, team members but most importantly to the unaccompanied children.

The Ambassador visited METAdrasi’s non-formal Education Center – located next to VIAL – that operates with the support of UNHCR. He was informed on METAdrasi’s Educational Programme, to which more than 110 children, residing in VIAL, participate on a daily basis. This activity has as a main objective the integration of children into formal education, either in Greece or in other European Union member-states.

Afterwards, he visited METAdrasi’s Transit Accommodation Facility for Unaccompanied Minors that has been operating since 2016 and is the only one in the island. The Facility initially started its operation thanks to the support of France, while in the last year is being supported by Stavros Niarchos Foundation. He was informed over the problems of the Facility’s long-term funding, as well as of the efforts for fundraising that aim at the continuance of operation after September. We shared with him our experiences about the generous support of Chios residents and volunteers, as well as of the Public Prosecutor, who stand by our side from the very beginning.

One of the most important moments for all of us, was the time and the attention the Ambassador showed in learning more about the unaccompanied children, their stories, difficulties and dreams for the future.

A performance that won our hearts: “Journey to the edge of the Rainbow”

Interpretation in hospitals: The case of Safike